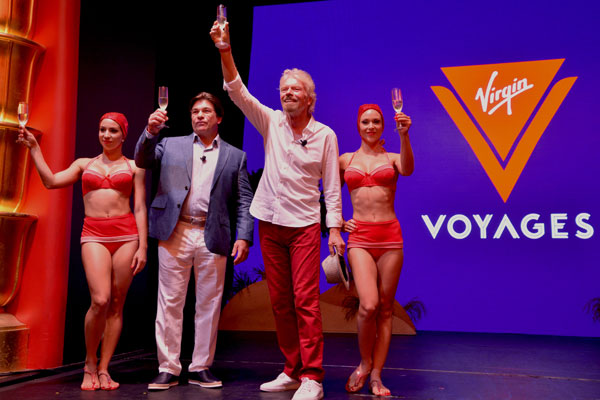 Virgin Voyages is the new name adopted by Sir Richard Branson’s start-up cruise venture which plans to launch with the first of three ships in 2020.

The Virgin Group founder revealed that the line had officially signed a contract for three 2,700-passenger vessels with Italian shipyard Fincantieri.

The company claims it will be the first cruise line to adopt a clean energy system called Climeon Ocean when the first ship starts running Caribbean itineraries from Miami.

Virgin Voyages will install Climeon Ocean, a system that will transform low-grade energy into clean electricity, on all three of its ships.

The resulting environmental impact will be an estimated 5,400 tons of carbon dioxide savings a year from each ship – an amount that would take 180,000 trees 30 years to absorb.

Clemeon chief executive Thomas Öström said: “The Climeon heat power system is an environmental breakthrough, and working with Virgin is of major importance to us.

We are excited that Sir Richard Branson and Virgin, with their focus on sustainability, have decided to become a pioneer of this technology.

“Transforming hot water to electricity will be a major source of energy production going forward.”

Virgin Voyages, backed by lead investors Bain Capital Private Equity and Virgin Group, expects a multi-billion dollar financing package for the purchase of its three ships to be finalised “shortly”.

The lead lending partners will be Cassa depositi e prestiti (Cdp) and UniCredit, and the loan will be fully backed by Italian export credit agency SACE and supported by SIMEST, both subsidiaries of Cdp.

Chief executive Tom McAlpin, a former president of Disney Cruise Line, outlined a ship building schedule including steel cutting early next year, followed by keel laying in Genoa in the fourth quarter of 2017.

He said: “This is anything but just another cruise or holiday, it will be a transformational experience delivering a very ‘Virgin style’ of adventure.”

Sir Richard, speaking in Miami to reveal the new name for the former Virgin Cruises project, said: “Thousands of future sailors and travel professionals shared their thoughts with us and tasked us with delivering the most irresistible vacation at sea and that our name alone should leave them dizzy with anticipation.

“I’m excited to reveal we are now Virgin Voyages, and while we have lots of work ahead to build our three ships, we can’t wait to welcome you aboard the ship of things to come.”