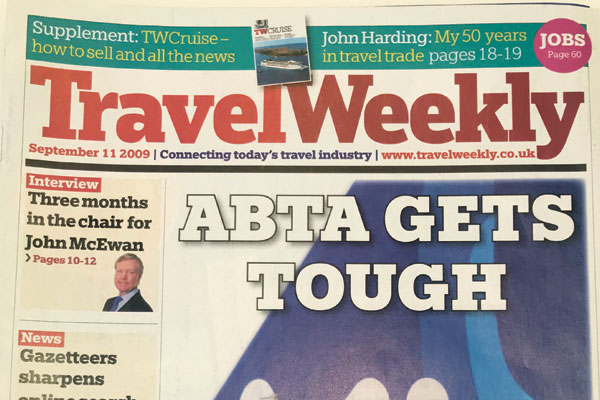 • Totally Travel chairman and industry veteran Harry Goodman teamed up with Hays Travel boss John Hays to launch a tour operation selling upmarket long-haul breaks, with holidays due to go on sale through the agency’s shops, call centres and homeworkers in December.

• EasyJet said it was closing its East Midlands base and cutting flights from Luton because of a 25% hike in charges, while Abta appointed Luke Pollard as head of public affairs and Nikki White joined as head of destination strategy and services. This followed the departure of Andy Cooper, who joined Thomas Cook. 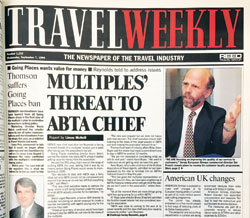 • New Abta chief executive Ian Reynolds faced renewed threats of an exodus by the multiples, just a week into the job. Going Places warned it may leave Abta unless it got value for money while Thomas Cook only committed to stay another year.

• In a separate article, Abta wrote to 392 companies warning them they would be thrown out for non-payment of subscriptions.

• Meanwhile, as predicted last week, all Thomson sales reps were banned from Going Places shops in the first step of the multiple’s plan to centralise its brochure racking policy. British Airways Holidays announced nine redundancies, including three from its on-the-road team, saying it was hard to justify a large field sales team following the multiples’ new rep restrictions.

• On the same topic, Sunvil Holidays managing director Noel Josephides expressed shock in his column at the Office of Fair Trading’s decision not to investigate the industry’s trading practices. Lunn Poly was reported as accounting for half of Thomson’s sales. 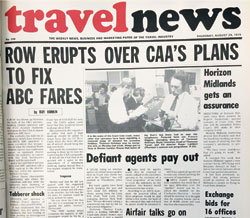 • The Civil Aviation Authority announced tougher bonding requirements. It increased the bonding level for non-Abta companies from 10% of anticipated turnover to 12.5% and for Abta companies from 5% to 7.5% from October 1, with further rises to 15% and 10% respectively for next year.

• There was a stunned reaction to Pan America’s plea for an immediate subsidy to stay afloat, according to Travelnews. This would see it joining the ranks of state-supported carriers.

• Meanwhile, Cristalotel hotels were forced to shut as the full impact of Court Line’s collapse hit Spanish resorts. Travelnews reported the Hotel Carousel, Palma Nova, and Saronga Playa, Minorca, had closed, while three more were imminent. Cristalotel was a subsidiary of holding company Cristaltour in which Clarksons had a 50% stake. Clarksons’ parent was Court Line.