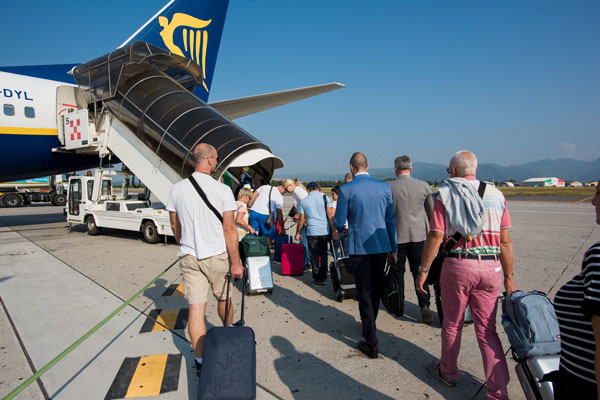 Ryanair today issued a reminder that only passengers paying extra for priority boarding will be allowed to carry two bags with them onto aircraft.

The budget carrier’s revised luggage policy comes into force from Monday January 15 in a bid to cut the volume of carry-on bags and reduce flight delays.

Priority boarding costs an extra £5 at the time of booking and can be added to a booking for £6 up to two hours via Ryanair.com and 30 minutes prior to the scheduled departure time on the Ryanair app.

Reduced fees for checked bags are being introduced with an increase in checked-in bag sizes to cut down on the number of passengers with two bags at the boarding gates.

“As too many customers were availing of Ryanair’s improved two free carry-on bags service, and with high load factors – 95% in December – there is not enough overhead cabin space for this volume of carry-on bags, which is causing boarding/flight delays,” the airline said.

But only priority boarding passengers, including those on Plus, Flexi Plus and Family Plus fares, will be allowed to bring two carry-on bags onto the aircraft.

Ryanair chief marketing officer Kenny Jacobs said: “We’re reminding our customers that from Monday, only priority boarding customers will be allowed to bring two carry-on bags on the aircraft.

“All other customers will be allowed to bring one smaller carry-on bag on board, while their second bigger wheelie bag will be placed in the hold free of charge at the boarding gate.

“This will speed up the boarding of flights and eliminate flight delays, alongside our new checked bag policy which offers our customers lower bag fees for a 33% increase in their checked bag allowance.”