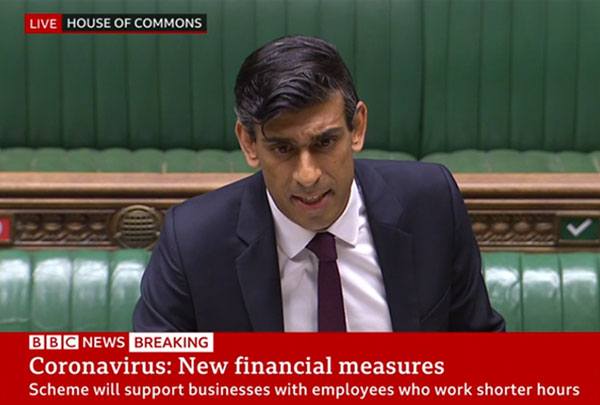 The Chancellor has announced a raft of new measures to support jobs and businesses ahead of winding up the government furlough scheme on October 31.

A new wage-subsidy scheme will see the government top up the pay of people who return to work for at least one-third of their normal hours.

Employers must pay the full rate for hours worked and the government and employers share the cost of two-thirds of the ‘missing’ wages, with the remaining third left unpaid and a cap on the maximum top-up payment.

The new Jobs Support Scheme will be available to all small and medium-size (SME) businesses for six months from the end of furlough.

Comment: ‘Rishi Sunak, we need your support before it’s too late’

But larger businesses must demonstrate their revenue continues to be hit by the Covid crisis.

The scheme is aimed to encourage companies to retain workers in jobs which remain ‘viable’ once restrictions are lifted, but not support ‘zombie’ jobs which would not remain without subsidy.

Chancellor Rishi Sunak unveiled the replacement scheme for furlough saying: “The new Jobs Support Scheme will directly support the wages of workers in work on shorter hours rather than making them redundant. It will support viable jobs.”

He told MPs: “The details will be set out shortly. But the new scheme does have conditionality.

“It will only be available to larger companies showing a decline in their revenue due to the coronavirus.

“There will be restrictions on payments to shareholders [by larger companies in the scheme] and they will not be able to issue redundancy notices to workers on this scheme for its duration.”

Sunak also announced an extension of the reduced rate of VAT on hospitality and tourism services until the end of March.

The Chancellor cut the VAT rate for tourism and hospitality from 20% to 5% from July 15, but this was due to end on January 12.

In addition, Sunak extended the government’s four existing loan schemes for businesses until the end of the year and increased the terms of loans from six years to 10 in order to reduce the monthly repayments.

The schemes have seen the government guarantee up to £58 billion in loans to companies so far.

A Treasury spokesperson said the bail-out on wages was “entirely focused” on saving jobs.

Companies intending to make redundancies at the end of furlough must legally give notice by October 1, leading to expectations of a torrent of job losses by the end of next month.

The new scheme follows intensive lobbying for support by business leaders and the aviation, travel and hospitality sectors.

The Treasury is understood to have studied state-supported part-time working schemes in France, Germany and Spain – in particular, the German kurzarbeit (short working) scheme which sees employers pay the wages of staff while they work and the state cover 80% of the remainder.

Estimates of the cost of the Chancellor’s scheme vary, but it is suggested it will cost the Treasury £500 million to £1 billion per month – a fraction of the cost of furlough, put at £39 billion.

Economist Allan Monks of JPMorgan described the scheme as “an extension of furlough, but on much less generous terms”.

Almost 10 million people have been on furlough for at least part of the time since lockdown began in March.

Comment: ‘Rishi Sunak, we need your support before it’s too late’