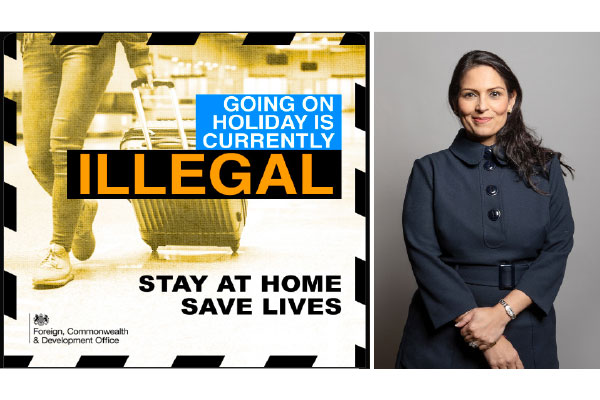 Tightening travel restrictions left industry sources warning “we’re still not at the bottom of this” as all travellers in Scotland face hotel quarantine and opposition leaders demanded blanket restrictions across the UK.

The government appeared determined to resist these calls, but a Foreign Office campaign declaring “Going on holiday is currently ILLEGAL” deepened industry dismay.

A senior industry source called it “blunt and unnecessary”, arguing: “The Foreign Office could easily differentiate between travelling now and travelling later or next year. It’s damaging to people who aren’t out of step with the government message.”

There was no detail on how hotel quarantine for arrivals from ‘high-risk’ destinations will work or how travellers’ declarations that a trip is ‘essential’ will be policed, amid reports the start date has been put back to February 15.

An airline source said: “We don’t believe airline staff should be questioning passengers on their reason for travel. People are in breach of lockdown if they go to the airport for non-essential travel, so it’s a police matter. The person without a legitimate reason is most likely to lie and most likely to kick off if denied boarding.”

The government added the UAE to the list of high-risk destinations from which travel is banned from Friday, axing 78 remaining services a week, along with Rwanda and Burundi.

But the source insisted the vaccination rollout gives “every reason to have hope for the summer”, saying: “We’re not at the bottom of this yet – we have these new restrictions, and we’ll have restrictions for some time because that is the only way we’ll be allowed to open up.

“But we have pre-departure testing in place [and] travel corridors are suspended – the policy hasn’t been cancelled. They allow a way out of this. Travel corridors allow restrictions to be targeted.”

Alan Bowen, legal advisor to the Association of Atol Companies, agreed: “The future is on hold, not cancelled.” He suggested blanket quarantine for a period might be better, arguing: “Quarantine is the way to cut the umbilical cord of the virus. It’s not popular [in the industry], but I fear it’s the only way forward. Strangle the virus, but have a deadline for lifting it.”

Labour leaders urged hotel quarantine be extended to “all arrivals”, with MP Yvette Cooper arguing: “The countries that have controlled Covid best are those that took firm action at borders.”

He promised details of the measures “shortly”, insisting: “We’ll be stepping up police enforcement.”

The PM promised to announce “a plan for taking the country out of lockdown” during the week of February 22.

The ban on entry from ‘red list’ countries includes all of South America, Portugal and southern Africa.