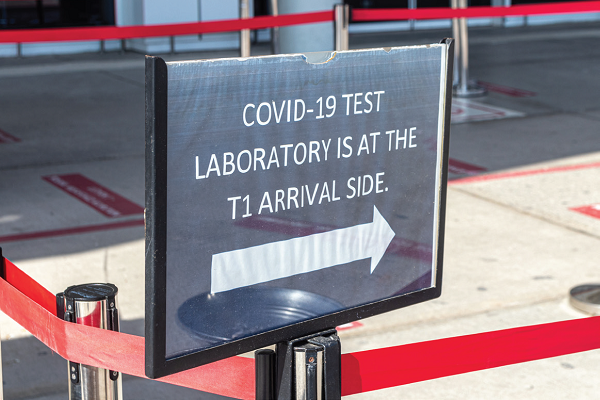 Industry leaders are demanding travel be included in the Prime Minister’s ‘pathway out of lockdown’ statement on February 22 following the latest toughening of travel restrictions.

He also confirmed a new Covid-test regime that will see all arrivals subject to two mandatory tests at two and eight days after arrival in addition to the pre-departure test already required.

Hancock also unveiled penalties of up to £10,000 for failing to stick to hotel quarantine and up to 10 years in prison for a false declaration on a passenger locator form.

Industry sources expressed disbelief. One airline source told Travel Weekly: “Even a week ago, we didn’t see this coming.”

The source acknowledged: “The industry has been in no position to influence the decisions this week. There is an awful lot of pressure on the government. They feel the need to look tough on the border.”

A second aviation source said: “This is about the variants. The government wants absolute certainty the variants won’t get in the way of the vaccination programme after they have thrown the kitchen sink at it. They also want the data from testing arrivals to scan for variants.

“But you can imagine the consequences. We’re not going to have any volume [of traffic] because of the process and cost [of quarantine and tests]. This can’t be a long-term policy.”

The source told Travel Weekly: “Our sector is out of synch with the wider situation. The peak looks past and the prime minister will talk on February 22 about re-opening the economy. But our sector is still heading nose first down. We want travel included in the February 22 statement. We need some confidence.

“We’ve also asked for a two-week review. We don’t know the longevity of these measures. Is it just for the remainder of lockdown? The moment we come out of lockdown we need some layering [of restrictions].”

Hancock declined to say how long the measures would be in force, but said: “These are not measures that will be in place permanently. We need to replace them over time. If we get good news on vaccines and mutations we will be in a better place. We just don’t know yet.”

On Wednesday morning, he told BBC Breakfast: “We don’t know the answer yet to when we will be able to travel again. It depends on the infection rate here and the vaccination rates. But it will also depend on other counties’ vaccination rates before we can do that unlock.”

Commenting on the £1,750 cost of 10-day hotel quarantine, he added: “It’s not a cheap thing to do which is again why people shouldn’t travel.”

And in response to the announcement about fines and prison sentences, he said: “I think the British public would expect strong action. We’re talking about the different variants here and we don’t want a situation where people bring something back and there’s a problem with the vaccines.”

Sunvil chairman Noel Josephides also appeared on BBC Breakfast and said he hopes for cheaper Covid tests and a ‘roadmap’ out of the current restrictions to be part of the prime minister’s announcement on February 22.

“We confidently expect that by May, seeing that most of the over-50s will have been vaccinated by then, that we will be able to go ahead,” he said, while reminding viewers: “There is nothing illegal about booking a holiday.”

“We, the travel industry, are very much part of the cure,” said Josephides, who talked-up the financial protection of booking a package holiday. “We provide happiness to millions.”

Danny Callaghan, chief executive of the Latin American Travel Association (Lata), said travel’s roadmap should be based on “milestones rather than specific dates”.

“As an industry we simply can’t survive without some sort of plan to reopen our industry, both inbound and outbound, and the knock-on effects to the UK’s hospitality and retail sectors will have a huge effect on the economy,” he said.

“It is more imperative than ever that bodies from across travel, tourism and aviation come together to pressurise the Government to agree a recovery pathway, and we must not accept the idea that this will come ‘at some time later in the year’ as the transport secretary stated last week.”

The Telegraph reported several senior politicians were alarmed at the length of the prison sentence for evading quarantine.

And a spokesperson for Aito, the Specialist Travel Organisation, said: “A 10-year prison sentence seems wildly OTT. People who kill and badly maim others don’t get that long in prison.

“They are trying to frighten people, in our view – they should have been stricter early on. We are now 14 months into this pandemic and the constant changing of rules, when many people can’t even keep track of which day of the week it is, causes mayhem.”

Rory Boland, editor of Which? Travel, tweeted: “For me, hotel quarantine probably closes the door on holidays abroad this summer. The risk of being away and the country you’re in being added to the red list is a £1,750 gamble.”

Paul Charles, founder of the PC Agency and #QuashQuarantine campaign, commented on Twitter: “Still no exit strategy or routemap from @MattHancock as to when quarantine policy will end. The economy will take a massive hit from the lack of certainty over re-opening.”

The Scottish government has confirmed it will go further and require all international arrivals from outside the Common Travel Area with Ireland to stay in a hotel quarantine.