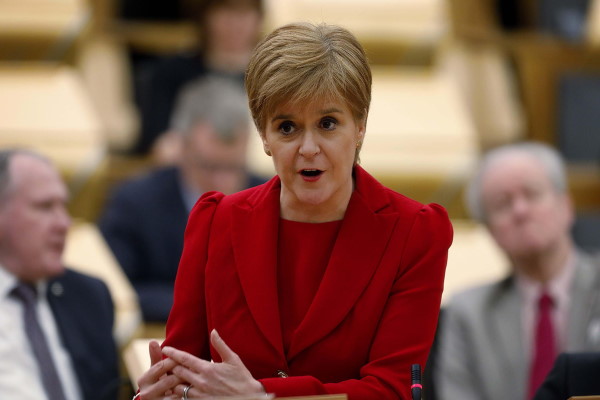 Lockdown restrictions in Scotland including the closure of non-essential retail could begin to be eased from late April, the first minister has announced.

However, the Scottish government has yet to provide a timeframe for the wider easing of lockdown in line with its UK counterpart’s roadmap announcement on Monday, instead saying more details would be published in mid-March.

Nicola Sturgeon said she anticipated a “phased but significant re-opening of the economy, including non-essential retail, hospitality and services like gyms and hairdressers” could happen from the last week of April.

In the meantime, the focus will be on the reopening of schools and a gradual easing of restrictions on social gatherings.

Sturgeon said there would need to be “trade-offs” to ensure the success of the reopening, citing the example of restrictions on international travel.

She said: “It is important to stress, of course, that all of this depends on us continuing to suppress the virus now – and continuing to accept some trade-offs for a period, for example on international travel.

“However, if we do so, I am optimistic that we can make good progress in returning more normality to our lives and the economy.”

The Scottish Conservatives said the announcement “fell short of public expectations”, and added: “This isn’t a route map out of Covid, it is holding document.”

“Today the first minister provided a clear message the aviation industry is not a priority for the Scottish government. We received no plan or framework against which we can start plotting any form of recovery.”

He added: “This sends a very worrying signal to our airports, our airlines and the thousands of staff our sector supports. We find ourselves in a position where airports and airlines in England can start planning to safely reopen in time for the summer, yet in Scotland we are left with more questions than answers.

“It is now two weeks since the Scottish government committed to setting up an aviation working group and it has still to meet. This lack of meaningful engagement cannot continue.”

Karen Dee, chief executive of the Airport Operators Association, said: “The first minister’s commitment to ensure travel restrictions are not in place for longer than is necessary is welcome but the lack of a commitment to set out a risk-based approach for aviation’s restart was disappointing.

“While public health considerations are, of course, the priority, now is the time for the Scottish government to work on a four-nation basis with industry to set out a pathway to aviation’s restart. This will provide certainty for the public and the aviation industry to plan for the months ahead.”

Dee added: “A differentiated approach across the UK would be confusing for passengers and potentially undermine public confidence in the robust measures that will be in place to ensure a safe restart.

“Meanwhile, Scottish airports are likely to struggle to attract airlines to reopen routes compared to airports in other areas of the UK and the EU where a clearer pathway to recovery is in place. This will undermine the economic and social recovery from the pandemic.

“As a minimum, the Scottish government should support the aviation industry through the government-ordered shutdown of aviation. The commitment for rates relief in the coming financial year was a welcome first step but significantly more support will be needed to ensure there are viable airports able to restart when the time comes.”

Frank Whitaker, chair of Aberdeen City and Shire Hotels Association, which represents more than 50 properties and tourism businesses, said: “Today’s much anticipated announcement was a disappointment to our members and the wider tourism sector.

“The implication that, when hotels, bars and restaurants are able to reopen again in the last week of April, Scotland will be in level three, is a hammer blow to businesses which have in effect had very little revenue-generating potential since March 2020.”

He added: “Opening in level three would not be financially viable for many hotels as their revenue potential would be severely affected.

“We’re calling for the Scottish and UK governments to give us clarity today about the way forward instead of offering a three-week lapse before the next update [and] for the VAT reduction for hospitality to be extended for a full 12 months from the time we are able to reopen.

“We want the reassurance that the Job Retention Scheme will be extended for the hospitality sector until at least the end of Q3 of 2021 and for the temporary space for people measures that allowed outdoor hospitality in marquees to be extended until the end of 2021 too.”