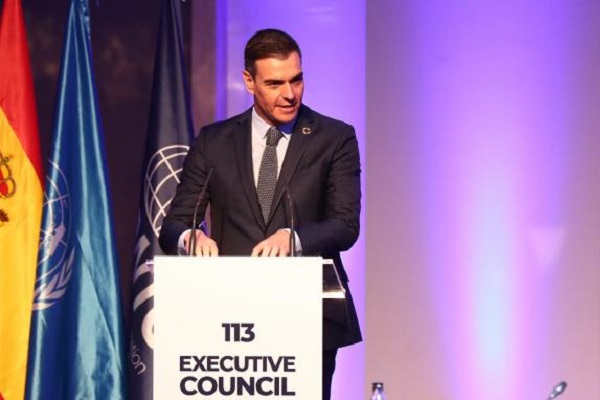 Spain’s minister for tourism says the country hopes to welcome international visitors by the end of the spring.

Reyes Maroto issued a statement after national newspapers picked up on comments at the UNWTO’s executive council by Spanish prime minister Pedro Sanchez, pictured, who suggested the country would be “better prepared” at the end of the summer – when he expects 70% of the population to be vaccinated.

Tourism minister Maroto said efforts are being focused on controlling the pandemic, speeding up the vaccination process and guaranteeing the safety of tourists.

She said the Spanish Government wanted to receive international tourists as soon as possible noting that the rollout of vaccines in Europe offered hope.

“Our priority in 2021 is to reactivate tourism and resume safe mobility on a global scale as soon as possible,” Maroto said. “We are working to adopt a common framework of a series of planned actions to give confidence to tourists.

“We hope that at the end of spring and especially during the summer, international travel will resume and travellers will choose Spain as their destination”

The minister said safety around health was a barrier to travel for tourists, but one that will not have a long-term impact for Spain as a destination and pointed to a Turespaña report which suggested the country’s image as a tourist destination has not been harmed by the pandemic.

The Majorca Daily Bulletin was among the English-speaking Spanish titles to report that Sánchez said he was “convinced” that once 70% of the population had been vaccinated, Spain would be “progressively” better prepared to receive foreign tourists.

The Sun quoted Sanchez as saying: “Our internal plan is to promote a strategy that includes vaccination of the Spanish population at the highest possible rate.

“We are already the ninth country in the world in the vaccination process and one of the first countries in Europe.

“And we are going to advance with the vaccination at the highest rate until reaching 70 per cent of the population with immunity by the end of the summer.

“This will allow Spain to be progressively better prepared to receive international tourists.”

In the UNWTO’s official recommendations and next steps, the body said vaccination opens “a critical window of opportunity to fight the Covid-19 pandemic and promote the safe reassuming of international travel alongside other risk mitigation tools such Covid-19 testing.”

The committee called for a stepping up coordination, and use of vaccination certificates to ensure implementation of common, harmonised travel principles, protocols and documents.

The UNWTO said it supports the standardisation of testing protocols and certification systems, based on commonly-agreed evidence and for a harmonised system in all countries to open borders safely.

The UK’s travel ban currently prohibits travel to all destinations and ministers have warned it is ‘too early’ to book summer holidays. The UK’s R rate fell to between 0.8 and 1 today and the UK government has trumpeted the success of its vaccine rollout.

A video posted to travel industry Facebook group Travel Gossip shows health secretary Matt Hancock saying there was “a chance” international travel might resume this summer, but warned that relaxing restrictions too soon could take the country “back to square one”.

He compared the situation to Australia, saying tougher international restrictions are “the price” the country has paid for less draconian lockdown policies domestically.