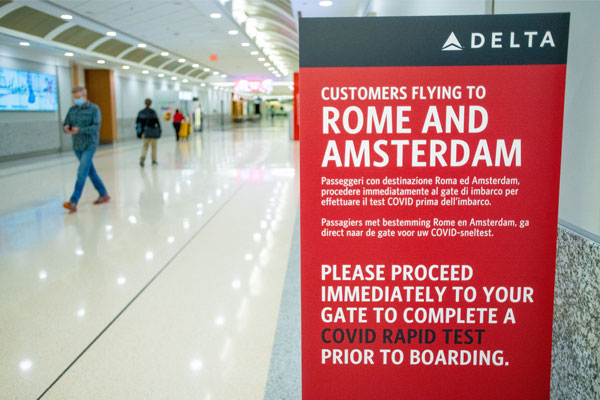 However, Delta chief executive Ed Bastian insisted: “I’m optimistic this will be a year of recovery and a turning point.”

The carrier reported a full-year ‘adjusted’ loss before tax of $9 billion, excluding $6.6 billion in costs “related to the impact of and response to Covid-19”, following and adjusted loss of $2.1 billion in the final quarter of 2020

Delta ended the year with $16.7 billion in liquidity – including cash and equivalents and undrawn credit – and expects to receive an additional $3 billion from the US Treasury in the current quarter.

The airline’s total debt ballooned to $29 billion although its ‘adjusted debt’ was lower at just under $19 billion – $8.3 billion up year on year.

Delta reported its scheduled capacity would be 35% down year on year in the first quarter of this year and capacity on sale down 55% as the airline continues to keep all centre row seats empty. Capacity for sale in the final quarter of last year was down 62%.

“The early part of the year will be characterised by choppy demand recovery and a booking curve that remains compressed, followed by an inflection point, and finally a sustained demand recovery as customer confidence gains momentum, vaccinations become widespread and offices re-open.

He said: “For each phase, Delta has the levers to pull to successfully react to the emerging demand environment, including tightly matching sellable capacity to expected demand.”

Delta owed $4.5 billion in refunds to customers for cancelled flights at the end of the year, with about 65% comprising ‘travel credits’.

The airline refunded “more than $3 billion to customers” in 2020 and has extended the validity of travel credits through to December 2022.

Bastian reported a 20% reduction in Delta’s workforce over the year, with almost 18,000 employees departing, but wage costs were cut 34% due to reduced hours and unpaid leave.

The carrier’s operating expenses fell 40% year on year, with average daily cash burn reduced to $12 million a day in the final quarter of 2020, down from $24 million in the third quarter and almost 90% down on March 2020.