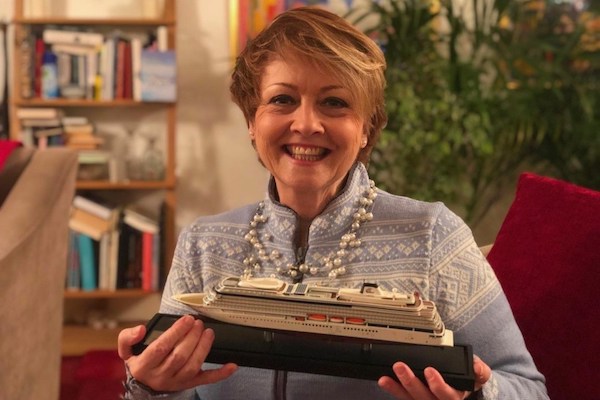 Journalist and broadcaster Anne Diamond will be the godmother of Viking’s seventh ocean ship, Viking Venus, which is scheduled to launch this spring.

The final touches are being added to the 930-passenger ship at Fincantieri’s shipyard in Italy.

Diamond is best known for her career on British breakfast TV and has interviewed people such as Ronald Reagan, Margaret Thatcher and Prince Philip.

She also led a campaign to raise awareness about cot death, following the death of her son, Sebastian.

The campaign saved more than 20,000 babies lives and she is the only non-medic to have been awarded the Medal of the Royal College of Paediatrics and Child Health.

Diamond also features on Viking’s online channel, Viking.TV, which launched last March in the early stages of the pandemic.

It aims to share positive experiences while people are staying home, rather than travelling. Every Thursday since the launch of Viking.TV, Diamond has interviewed people with connections to the cruise line.

Her Thursday livestreams will continue in 2021, with guests in January to include former Nasa astronaut Kathy Sullivan and British broadcaster and explorer Sir Michael Palin.

Karine Hagen, Viking executive vice-president, said: “Since the day we paused operations, Anne immediately volunteered to help our guests and crew manage through this period of uncertainty.

“Anne became the face of Viking.TV on her weekly Thursday livestreams, where she has interviewed many interesting friends of Viking, while brightening the days of nearly two million viewers.”

Diamond added: “I am thrilled and honoured to be entrusted as godmother to the Viking Venus and cannot wait until we can celebrate her inaugural cruise in a safer and happier 2021.

“I am so proud to be part of the growth of the award-winning Viking.TV – with special thanks to all my inspirational interviewees – and now onwards, to the Viking Venus and a brighter outlook for travel.”