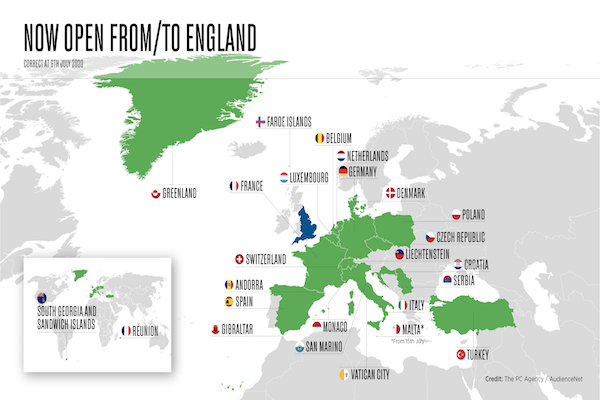 Only a third of the 74 destinations confirmed on the government’s list of ‘safe countries’ can be accessed from England without travel restrictions, new research reveals.

These are the only countries that are not forcing English visitors to quarantine for 14 days and don’t have any border controls that stop visitors from England entering, according to the study by the PC Agency and Audiencenet. 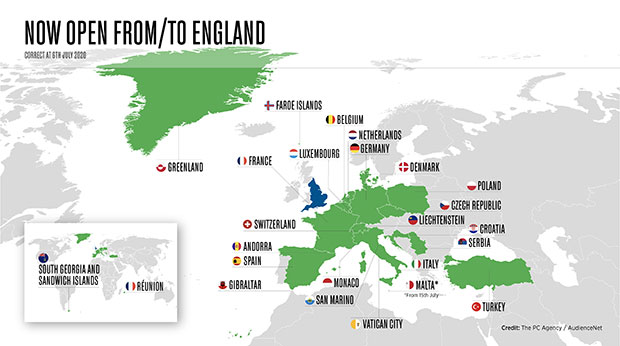 The rest of the countries on the government lists are either closed to international flights, or impossible to enter without either quarantine of some kind or major testing procedures.

The details emerged today amid growing travel industry calls for the government to produce a definitive list of countries deemed safe to travel to which are also fully open to travellers from England.

On Friday, the government published a ‘safe’ list of countries alongside confirmation that 14-day quarantine rules would be relaxed from July 10, lifting the requirement for anyone arriving from them to self-isolate for 14 days in England. Scotland, Wales and Northern Ireland have yet to decide if and when they will lift restrictions.

The Foreign Office published a list of 67 countries while the Department for Transport issued a list of 59 countries plus 14 British Oversees Territories in addition to Ireland, part of the Common Travel Area.

However, Commonwealth destinations on the list like Australia and New Zealand have closed their borders and are thought unlikely to re-open them before Christmas because of the risk of importing coronavirus from countries with higher rates like the UK.

Japan, also on the list, will also not accept anyone who has spent 14 days in the UK for the same reason. Vietnam, which has one of the lowest rates of Covid-19 in the world, was among the 74 but it has also shut its borders to nations like the UK.

Greece is not accepting direct flights until July 15 while Cyprus closed to anyone who has spent the previous 14 days in the UK.

Austria has been approved for travel without quarantine on holidaymakers’ return to the UK but it is advising that people only enter the country for essential reasons.

Travellers also have to have a Covid-19 test, which costs at least £150, within four days of their flight date from the UK and produce a medical certificate with a negative result on arrival. If visitors do not, they need to quarantine on arrival for 14 days.

Other locations on the government’s list, like Bermuda, also have a tough testing regime before they will allow any holidaymakers from the UK.

St Lucia, where the Foreign Office lifted its ban on non-essential travel and lifted quarantine, is currently in a national state of emergency which means there are curfews in place, while Jamaica has introduced a questionnaire which visitors have to complete before being allowed entry.

Paul Charles, chief executive of PC Consultancy, which produced the details, said the way the government had presented its lists was confusing, if not misleading for holidaymakers.

He said: “Consumers are confused by the two lists produced by government, as it’s just not clear which countries are actually accessible without having to quarantine on arrival.

“Our research shows that holidaymakers and business travellers from England can only enter 25 countries, out of 74 on the DfT list, without being quarantined.

“It’s vital that the government provides clarity to consumers who are booking, and provides just one list that is accurate and up-to-date in terms of where we can actually access.”

Emma Coulthurst, travel commentator from holiday price comparison site TravelSupermarket said: “The government’s latest information released late on Friday on where UK citizens can holiday this summer has the potential to confuse people and see them unwittingly book holidays which, due to restrictions imposed by the destination country, they might not be able to take.

“There are some countries on the government FCO and DfT lists which are refusing UK citizens entry or imposing strict entry requirements, which either completely prevent holidays or make them extremely difficult or more costly.

“It is vitally important that holidaymakers check the individual country’s entry requirements before booking and also book cancel-for-free or flexible rebooking options in case they unintentionally book a holiday which entry restrictions then prevent them from taking.

“The UK government should be making it clearer what the actual situation is for travel from the UK to countries on their lists and providing a lot more clarity on where holidaymakers can actually go to from the UK without restriction.”

The company found that demand for summer package holidays has shot up in the last week by as much as 48% to Turkey, 33% to the Canary Islands, 28% to Costa Blanca and 11% to Costa Brava.

But the absence of Portugal from the ‘safe’ list – provoking a diplomatic row – saw interest in holidays to the country fall by 37% week-on-week.

With Greece announcing an extension of a ban on flights from the UK until July 15, searches fell by 20%, with greater declines to  specific destinations such as to Corfu -30%, Rhodes -25%, Santorini -24% and Crete -16%.

Gemma Antrobus, chair of Aito Agents, told The Sunday Times that confusion over the lists was set to cause “havoc” this week.

She said: “Let’s make the two lists exactly the same. It’s just going to cause havoc this week with people wanting to know can they travel, can they not and is their holiday going ahead.”

A DfT source told the paper that the lists had been based on two different considerations, with the FCO’s advice focusing on healthcare in the destinations and the DfT focusing on managing the risk posed by those returning to the UK.

Sunvil chairman Noel Josephides said: “It’s as though government departments don’t actually speak to each other. All we want is one list.”

He added: “Each delay of a day probably costs us a week in bookings. The clients that booked before the pandemic have steadily cancelled or deferred, because of the uncertainty and the on-off messages that we’ve been getting.”

Amanda Hills, president of public relations and travel marketing firm MMGY Hills Balfour, said: “As dozens of countries will now be exempt from a travel quarantine, for many, the path to recovery becomes more clear.

“Travel companies have long been calling for urgent action regarding ‘travel corridors’ and this welcomed announcement from the UK government will give our industry a much needed lift.

“The tourism sector is resilient and now it is safe to do so, we must work to build consumer confidence in international travel.

“As the UK moves into a space of opportunity, the co-ordinated communication of new protocols, such as WTTC’s Safe Travel stamp, will be a key part of this journey.

“On the road to recovery, clear and credible communication will be the vehicle to earn back peoples trust in travel.”