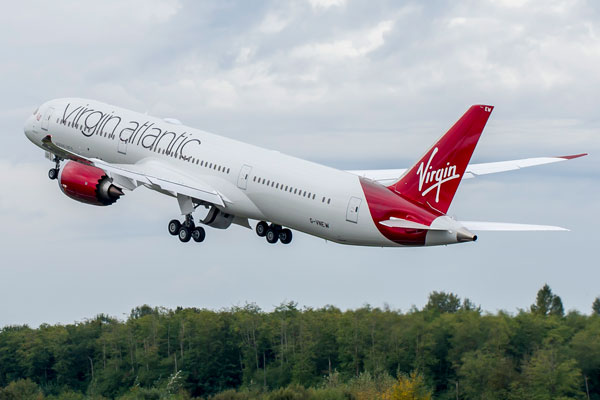 Government plans to quarantine arrivals to the UK would delay Virgin Atlantic’s return to flying until August, a month later than the carrier previously intended to resume operations.

However, Virgin Atlantic’s return to flying may depend on securing fresh financing.

The carrier was in talks with at least a dozen investors this week while Richard Branson’s Virgin Group has put 25 million shares in US space-tourism business Virgin Galactic up for sale in an effort to raise $500 million “to support its leisure, holiday and travel businesses” including Virgin Atlantic.

The aviation and travel industries are awaiting details of the government’s quarantine plans, having been told only that the government “will introduce a series of measures and restrictions at the UK border” which will require “all international arrivals not on a short list of exemptions to self-isolate in their accommodation for 14 days on arrival into the UK”.

A Virgin Atlantic source told Reuters: “If the quarantine is in place, the earliest [operations will resume] is August. If there’s no quarantine, you could see, maybe, July.”

Other carriers have indicated they will resume expanded schedules sooner, with Wizz Air already operating from Luton and Ryanair planning a resumption from July.

However, British Airways parent IAG has suggested its flying would be “minimal” under quarantine rules for arrivals.

Virgin Atlantic is meanwhile pursuing investment in a move likely to cut Branson’s 51% stake in the carrier. Delta Air Lines owns the remaining 49%.

The carrier has reportedly placed US-based restructuring firm Alvarez & Marsal on standby to prepare for potential insolvency, including a possible a ‘pre-pack administration’ if all else fails.

This would see the airline’s assets sold before the appointment of an administrator.

Virgin Atlantic declined to confirm the appointment. But Delta chief executive Ed Bastian confirmed Virgin Atlantic could go into administration, saying: “If they are required to go through an administrative process, I’m confident they could re-emerge.”

The airline has denied it needs a deal by the end of May to survive, but confirmed it had hired investment bank Houlihan Lokey to examine its options.

Houlihan Lokey presented to at least 12 potential investors this week, mainly private equity and hedge funds, including Greybull Capital which put Monarch Airlines into administration in 2017.

Virgin Atlantic also remains in discussions with the UK government about a request for £500 million in aid which was turned down in April.

The airline is reportedly examining the possibility of a public-private rescue, hoping the government might provide a £500-million credit guarantee.

However, the government declined to provide such a guarantee for Virgin’s former part-owned subsidiary Flybe in March and also rejected a Virgin Atlantic request for £500 million in the form of a loan and credit guarantee in April.

Virgin Atlantic lacks the credit rating to draw on Bank of England loans to businesses as British Airways and easyJet have done.

It also lacks sufficient assets to offer as security on loans, having already mortgaged its landing slots at Heathrow – probably its most-valuable asset.

Analysts have cast doubt on its ability to repay any loans given the carrier failed to make a profit through most of the last decade, including in 2017-19 when leading airlines in Europe and the US reported record profits.

But chief executive Chai Weiss has insisted: “Virgin Atlantic can become sustainably profitable. These [borrowing] facilities may not be drawn down. Within two to five years we would pay it back, probably sooner.”

Weiss has also said he is “100% confident” Virgin Atlantic will survive.

The carrier recently announced it will cut 3,150 jobs, almost one third of its workforce, and pull out of Gatwick Airport, although it intends to retain its landing slots at Gatwick

An internal memo to the airline’s pilots suggested the redundancies could help win UK government aid, saying: “It’s critical we demonstrate we have taken all self-help measures.”