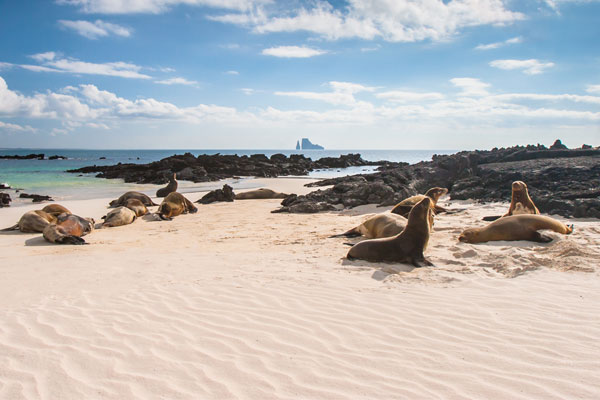 What’s it really like to sail the Galápagos? Laura French finds out on a cruise with Metropolitan Touring.

“We apologise for the delay,” announces the flight captain. “There’s an iguana on the runway.”

Welcome to the Galápagos.

Roll on 30 minutes and I’ve already seen the infamous blue-footed booby show off its electric blue-hued legs, an enormous pelican soar over the crashing waves, a mound of jet-black marine iguanas piled high on the rocks, and a big, blubbery sea lion slumped on the side of the port. I haven’t even boarded the ship yet.

It’s a sign of the things to come as I explore this remote archipelago over the following week on Yacht La Pinta, a 48-passenger vessel operated by Metropolitan Touring – the first company to ply these waters, launching cruises in 1969.

“These islands, 600 miles off the coast of mainland Ecuador, are quite unlike anywhere else on Earth – and they’re all distinct.”

There’s no doubt this is one of the world’s most biodiverse regions – about 97% of its reptiles, 80% of its land birds and 30% of its plants are found nowhere else in the world – and by the end of the trip I’m starting to understand how this unique set of conditions helped form the basis for Charles Darwin’s theory of evolution. He came on a mapping expedition in 1835, and used the differences he noticed on mockingbirds and finches on each island to develop his ideas around natural selection.

While I can’t quite compare my six-night sojourn to Darwin’s five-week exploration, I can conclude that these islands, 600 miles off the coast of mainland Ecuador, are quite unlike anywhere else on Earth – and they’re all distinct. Here’s my guide to the youngest, most volcanically active of the lot: the western isles. 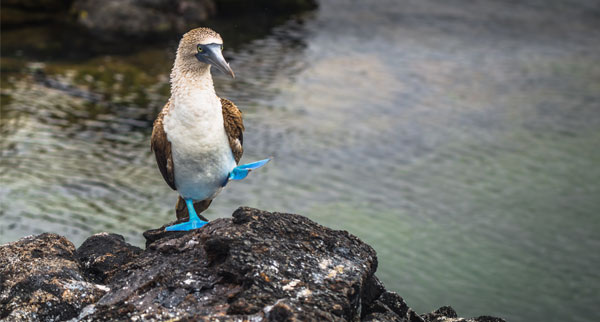 After a three-hour flight from Quito, I’d landed on a tiny airport strip on Baltra Island, the entry point for the archipelago. Two hours later we were sailing for our first port of call: North Seymour.

Measuring less than one square mile, this pint-sized isle is arid, sparse and desert-like – all swathes of honeyed sand lining the shore, and a bed of parched, reddish-green shrubbery covering the land.

“Inland, yellow-orange iguanas lay under the shade of cacti, so fully camouflaged against the desert-scape you could barely see them.”

It’s a hotspot for sea lions, land iguanas and birds, and we saw whole crowds of them clustered around the shores; on the beach, a baby sea lion suckled its mother while a plump male waddled along, groaning loudly against the tinny crash of waves on rocks.

Inland, yellow-orange iguanas lay under the shade of cacti, so fully camouflaged against the desert-scape you could barely see them (yellow means they’re ready to mate, apparently,  and these were positively glowing).

Close by, a male frigate blew up its bright-red belly like a huge balloon – an attempt to attract a female, our guide Sabina told us – while a blue-footed booby stood proudly displaying its pastel feet (“a sign of a good diet”), hovering over a freshly laid egg. If there was a symbol of the sheer variety of life in the Galápagos, this was surely it. 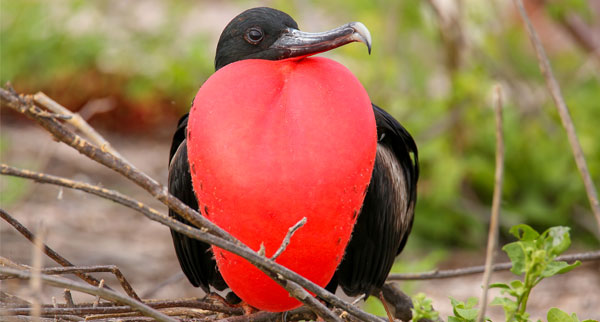 But there was more to be seen the following day, when we sailed to the largest of the islands, Isabela. At about 3,000sq miles, this sprawling mass of marble-swirled rock and sand takes up almost half of the Galápagos’ land area and is ‘young’ by Galápagos standards, at about 700,000 years – compared with more than three million for the oldest islands, which are found in the east and tend to be characterised by less volcanically active, greener terrain.

It’s here that most of the archipelago’s Galápagos penguins are found, and it’s one of only two islands where you can spot the endemic flightless cormorant.

We saw both on a scenic Panga ride around the northern coast, admiring a series of magna-formed caves before witnessing a pod of about 50 dolphins leap, dance and shimmy around within metres of the boat. Later we dived into the water for a snorkelling session, where penguins whizzed past like big, furry bullets, and sea turtles glided alongside huge, slithery manta rays.

“We dived into the water, where penguins whizzed past like big, furry bullets, and sea turtles glided alongside huge, slithery manta rays.”

It wasn’t just the waters of Isabela that left an impression. It’s one of seven islands home to the Galápagos tortoise, the largest species of tortoise in the world, weighing up to 250kg.

The following day gave us the chance to get face-to-face with them on an excursion to Urbina Bay; a curve of black, volcanic sand scattered with patches of greenery, set on the western side of the island.

Owing to their lack of natural predators, these huge beasts aren’t shy (suffice to say they have little regard for the six-foot distance rule set by the park), and I was soon dodging in and out between them, watching their territorial battles play out with theatrical flourish. At one point two males sidled up to one another, mouths gaping, faces scowling, in a show of biggest-open-mouth-wins rivalry that proved a gripping display. 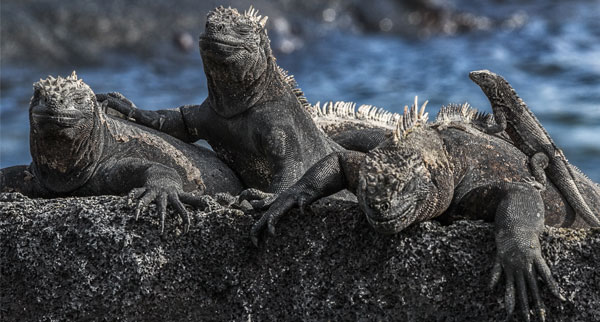 From here it was on to Rabida, a small, crater-studded isle nicknamed the Red Island for its unusual, almost Mars-like landscape of rust-red sand and rock, dyed from iron oxide.

Within minutes of clambering ashore, a trio of flamingos flew over our heads in a flash of magenta, landing in an emerald saltwater lagoon to join several others elegantly arched over the water. Elsewhere we spotted tiny Darwin’s finches, bright blue-eyed Galápagos doves and brown-and-white mockingbirds, nestled among prickly pear cacti and dry, twiggy trees.

“A trio of flamingos flew over our heads in a flash of magenta, landing in an emerald saltwater lagoon to join several others arched over the water.”

But the standout moment here came when we snorkelled straight off the beach, glimpsing sea lions so close their whiskers almost brushed my face, alongside swarms of colourful fish, rays, green sea turtles and – the ultimate Galápagos trophy – a string of white-tipped sharks, following one another in a graceful trail beneath me, grey bodies swishing with the gentle flow of the water. It was a surreal moment. 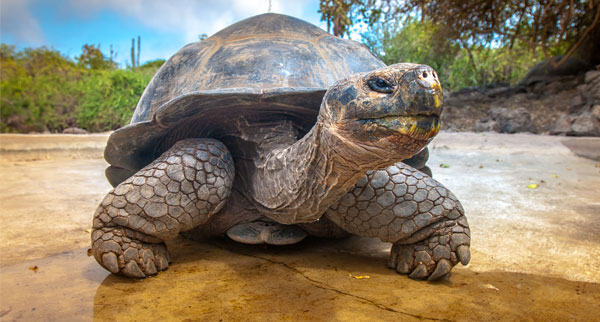 The most unique experience for me, though, came when we visited Fernandina – the youngest of all the islands and one of the most remote, located about 80 miles west of Santa Cruz.

This secluded spot is the most volcanically active isle in the archipelago thanks to its youth, and you can feel it.

Exploring its ash-black rock and grey-sand beaches felt otherworldly, almost apocalyptic. Huge, foaming waves crashed on the shore, raw and rugged beneath a stark grey sky, and there was little colour or life beyond the hundreds of inky-black marine iguanas stacked on the rocks, and the odd, glistening sea lion sprawled out by the water.

“Huge, foaming waves crashed on the shore, raw and rugged beneath a stark grey sky.”

It was about as far from stereotypically ‘exotic’ as you could imagine, rain battering down in thick, heavy pellets – but that’s exactly what was special about it. No two of these islands are the same. Every one has its own unique geology, climate and landscape, delineating a certain period in time.

When I asked our expedition leader, Carlos, to sum them all up in one, he said: “The Galápagos are living proof of evolution. When you come here, it’s like you’re going back 300 million years. You’re walking on the land of the reptiles – you’re seeing the beginning, the origin of everything.”

“The feeling of complete and utter remoteness, of standing at the “origin of everything”, is where the real, unexpected magic lay.”

That’s exactly how I felt, standing there in what seemed like the middle of nowhere, watching these calm, still creatures live out a simple life relatively untainted by humans (in fact, Fernandina is one of the only islands humans have never brought outsider species to). And while I’d already imagined the excitement of seeing all these creatures in their natural habitat, for me, the feeling of complete and utter remoteness, of standing at the “origin of everything”, is where the real, unexpected magic lay. 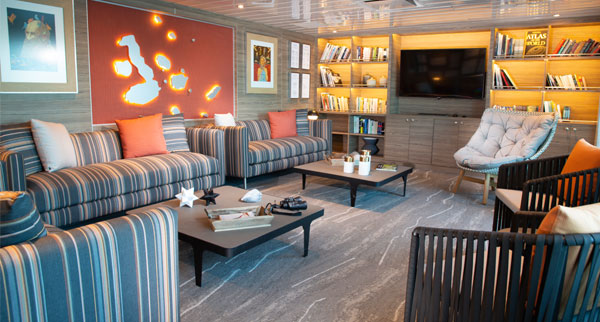 Newly renovated, this 48-passenger vessel has one of the top five guest-space ratios in the Galápagos. I could always find a quiet spot, with communal areas including a sundeck, library and bar/lounge area. The food was impressive – despite restrictions on what can be brought from the mainland – with buffet-style breakfast and lunch, and set menus for dinner featuring Ecuadorian and international options. Group dining on big tables encouraged mingling, with the average age of passengers in their 60s. The real emphasis was on the excursions rather than the ship, though, with two to three daily (gentle) walks plus snorkelling, kayaking and paddleboarding.

Book it: Rates start from $6,428 per person for six nights, based on double occupancy.
lapintagalapagoscruise.com

• Get the season right. If clients want hot, tropical islands, suggest December to May, when it’s greener thanks to rain and humidity. If they want cooler climes, suggest the dry season from April/May to December.

• If clients get seasick, suggest a larger vessel and a central islands itinerary, where the waters are more protected from open ocean currents.

• Reassure clients they won’t be battling with other vessels; the park has a rotation system that means cruise lines can’t return to the same site in any 15-day cycle.

• Look at the eco-credentials of a ship. It’s a key focus for us and we’ve introduced a project that aims to offset the carbon footprint of guests by  purchasing and protecting forests on the mainland.

Santa Cruz is the economic centre for the Galápagos, with most of the action focused around laid-back Puerto Ayora. We stopped here on the cruise to visit the Charles Darwin Research Station, which protects giant tortoises and other species, but if clients want to linger longer, suggest a post-cruise add-on. Finch Bay makes for an excellent base with a peaceful beachfront location, a new spa and a stylish pool area. Rates start at $566 a night, based on two sharing with breakfast.
finchbayhotel.com