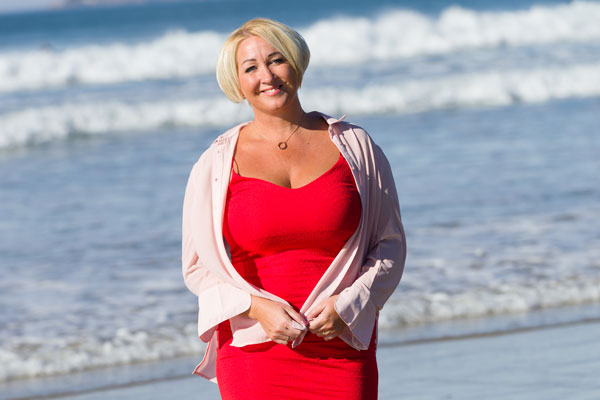 Q. You flew business class on American Airlines out to LAX. What was that like?
A. You have your own little area, like a pod, which was really comfortable. They give you a bag of toiletries in a cabinet, and there was a buffet of cheesecakes during the flight. It was a great way to start the trip. I slept really well.

Q. Talk us through your first day.
A. After landing, we transferred to the Mondrian Los Angeles in West Hollywood. It was lovely and we ate there that night. I had a delicious chicken meal with caramelised crispy sprouts – my favourite meal of the trip. A few of us went for a drink later at the hotel’s Sky Bar, which had great views over West Hollywood.

Q. Up early again the next morning?
A. Because of jet lag I was up again at 4am, so I went for an early walk with one of the others along Sunset Boulevard, and we grabbed a coffee. That was before our bike tour around Beverly Hills, including Rodeo Drive. We saw Elvis’s old house, the house where Michael Jackson died and Mick Jagger’s old place. There were so many amazing houses, and it was different doing that tour on bikes rather than a coach. I was knackered but I powered through.

Q. No rest for the wicked. What was next?
A. We had a lovely wine tasting, and some free time when a few of us wanted to go to the Hollywood sign. We took some great pictures in front of it then went to the Griffith Observatory, which featured in La La Land. I ticked off a lot of things on my bucket list on the trip.

Q. Anything else ticked off the list?
A. I’ve always wanted to meet a proper A-list celebrity, and when we went for dinner in the Sunset Tower Hotel I saw loads of them. When I walked up the stairs I heard a familiar voice, looked up and it was Bill Murray. I’m a massive Ghostbusters fan. We also saw Jennifer Aniston and Jake Gyllenhaal.

Q. Wow. Then you were on the road in the morning?
A. Yeah, we set off to Pismo Beach. We drove up it while the Californian forest fires were happening, and could see fire right up to the side of the road. Life went on as usual. We checked in to the hotel, Inn at the Pier, which was probably my favourite. It was really big, and very modern and airy.

Q. What did you do at Pismo Beach?
A. We went dune buggying. It was one of the activities I was a bit more sceptical about, but it surpassed my expectations and I had a lot of fun. We drove along the beach through miles of sand dunes and everyone had a go at driving. I don’t know what speed I was going but it felt fast. After that we went wine tasting at Tolosa Winery. They talked us through all the different wines, and this helped me realise which variety I like most – sauvignon blanc. I didn’t spit any out though.

Q. Was your photo at the beach too?
A. That’s right. The next morning my shoot was at 9am and we were out on the beach early. I wore a bright red dress, which the photographer said would match the Travel Weekly masthead letters, but walked down wearing a blouse over it so I didn’t look like I was coming back from a late night out. Some people were nervous about the shoot, but I really enjoyed it. It’s mind over matter – I just took it as a bit of fun.

Q. And the rest of the day?
A. We went to Creston Ranch with Central Coast Trailrides, another thing I was apprehensive about as I’m a little scared of horses. But once I was up there I just took in all the amazing scenery. I wasn’t worried at all and it was one of the best things we did. It was so cool, and proper America. I felt like a real cowgirl.

Q. And then off to Santa Cruz?
A. I’m a really big fan of The Lost Boys, which was set there, so I walked along the boardwalk listening to the soundtrack. I checked in on Facebook saying so – it got a lot of likes. We stopped specially for me to get a picture on the bridge (above, left). We also had a really cool boat ride with wine and pizza, and took some great pictures of the backdrop with the boardwalk in it. That night we had drinks on the beach while an acoustic band played for us. It was a really nice way to end the trip.

Business class is expensive but can make a difference to jet lag. I’d try to sell it on the way back if customers can’t afford it both ways.

I always used to say avoid hotels in Hollywood. Our stay in West Hollywood changed my mind.

If customers like horses, get them to a ranch. It’s a real American activity.

Donna on . . . celebrity spotting in LA

It was so surreal bumping into celebrities in West Hollywood. I knew that going to Johnny Depp’s favourite restaurant, which is popular among celebrities, there was a good chance of seeing someone – but it’s different when you see them going about their business. I said ‘Hi’ to Jennifer Aniston but I didn’t dare ask Bill Murray for a photograph because it was the sort of place where they expect not to be ‘papped’. Seeing all these famous faces was like being in a dream.