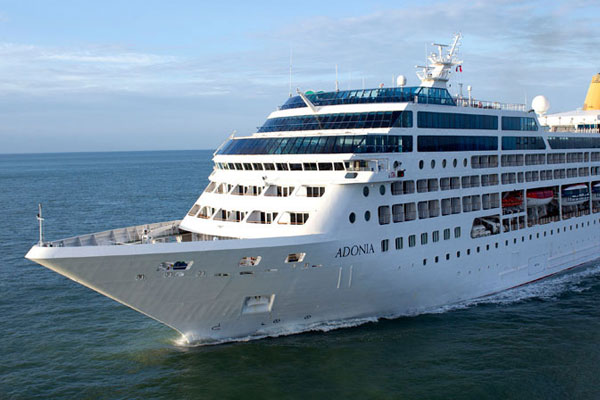 It will be renamed Azamara Pursuit and will join two similar-sized ships – Azamara Journey and Azamara Quest.

The 704-passenger ship will undergo refurbishment before Azamara takes delivery. Information about deployment and itineraries will be released in October.

Adonia’s last cruise for P&O will be on February 23 to March 9 starting and ending in Barbados.

Guests booked on any Adonia cruises after March 2018 will be contacted directly either by P&O Cruises or their travel agent.

Adonia returned to P&O’s fleet in Southampton in June after a year on secondment to social impact brand Fathom when it ran the first US sailings from Miami to Cuba in 50 years.

Most recently, the adults-only ship has been running a series of “discovery” itineraries with P&O, including a seven-night cruise to Bordeaux, Honfleur and Guernsey.

P&O Cruises senior vice president Paul Ludlow said: “During her time with us Adonia has captured the hearts of many thousands of P&O Cruises guests. She has ventured into new ports of call around the globe and has negotiated Icelandic Fjords, European rivers and Caribbean coves. We will ensure that these discovery itineraries are continued on other ships in the fleet.

“With almost six months until Adonia leaves the fleet, we will ensure that each of the cruises in her final season with us are extra special and celebratory.”

President and chief executive of Azamara Club Cruises Larry Pimental said: “We are pleased to expand our portfolio by 50%, allowing us to visit even more regions of the world through the acquisition of this sister ship.

“Our loyal guests and travel partners have asked for this expansion for a long time; we are very pleased to deliver this to them.”

Last year, Pimentel described extra capacity in the luxury cruise sector as “too much, too quick and too fast” and warned it would drive down prices.

Earlier this month Silversea Cruises announced it would launch a new ship in 2020 and unveiled plans to build two more.

Ritz-Carlton also revealed its plans to enter the cruise sector with three yachts, while Celebrity Cruises has three ships on order, Ponant has four, and Crystal Cruises, Scenic, Seabourn and Star Clippers also have new vessels set to launch.

Our family is growing by 50%! Exciting day for @AzamaraVoyages#AzaLocal#Travelhttps://t.co/604KrOxWlypic.twitter.com/mYOUiikosN