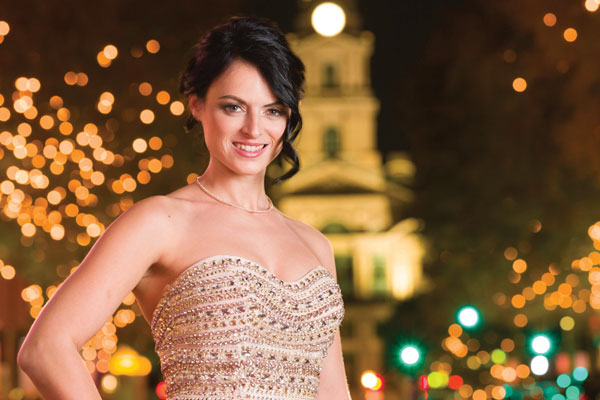 Q. How was Fort Worth?
A. It was just how I pictured Texas: fields and cowboys, and people wandering around in cowboy boots. I loved it. We went to the rodeo in the evening and got to explore the American football stadiums and the Japanese botanic gardens. The cattle run at the Stockyard was my favourite part.

Q. Talk us through the rodeo…
A. You can’t go to Texas and not go to a rodeo. They’ve got their local favourites and then there are famous people who travel there to compete. Some cowboys were more experienced than others, which made a great show.

Q. What about the Texan music scene?
A. We went to Billy Bob’s Texas, known as the world’s largest honky tonk, and saw Willie Nelson. I’m not into country music, but I knew who he was. All I can say is ‘wow’; he is such a star. When we told people we’d seen him, their jaws dropped to the floor with excitement. It hit home how special it was to have been able to see him live, especially in Texas.

Q. And then you got to go shopping…
A. The next day was my shoot, so I went to the shopping centre in the morning. The personal shopper gave me a run-through of what was there. We all had an allotted time with the personal shopper, and I used the rest to do more for myself. There were great discounts to be had, so I bought a lot of Christmas presents for my family and partner. I got 70% off an engraved Fossil watch.

Q. What outfit did you get for your cover shoot?
A. My brief was ‘Cinderella after the ball’, in a masquerade mask. The girls told me to act like I’d just left the ball. There were some beautiful dresses but nothing that fitted me. It felt as if they either didn’t have a dress in my size, or I didn’t like what they had. Three or four shops later, we arrived at Bloomingdale’s – and they had a big sale rail. There were lots of striking, glittery ball dresses – and I love glitter. The first dress that I tried on made me feel like a princess. Two elderly ladies in the store looked at me and got really teary. It was a magical moment.

Q. Talk us through the shoot…
A. The shoot was in Sundance Square in Fort Worth, which was perfect – totally me. You couldn’t see my shoes under my big ball dress when I walked across the square. Everyone was staring and I felt like a princess. It was wonderful. It made for such a magical picture. I’ve done modelling before, so I was in my element, and had my own ideas. I felt comfortable with the photographer, as he knew what he was doing. I had the idea to take off my mask and run away up the steps, so we did that shot. There was a little girl watching me the whole time and she said: “Look mummy, there’s a princess.” Someone said I’m not a real princess, but I said: “I am today!”

Q. How do you top that?
A. Well Austin was great, too. The best way in which to describe Austin to people at home is like Camden on a bigger scale. It’s a big wash-up of everything and has a really good vibe. We went to a barbecue where the brisket was as big as my head. It’s got a lot of musical history too, with Dolly Parton and the Foo Fighters among the stars to have performed there.

Karla looks like a modern-day Cinderella in her floor-length ball gown from Bloomingdale’s, complete with choker and mask from Bebe. Hair and make up courtesy of Simon Shopping Destinations. Karla’s clothes were sourced from Grand Prairie Premium Outlets, a Simon property in the Greater Dallas/Fort Worth region that offers exceptional shopping and savings with more than 110 designer and name-brand outlet stores, including Bloomingdale’s The Outlet Store, Coach, Hugo Boss and Kate Spade New York, all offering savings of 25%-65%.
simon.com

‘Keep Austin Weird’ is a famous slogan that encapsulates the city. Anything goes there.

Texas is where customers will see the real US. It has everything that you associate with the country.

Americans do Christmas better than us. The ice world at Gaylord Texan Resort is amazing.

I’ve flown business class with another airline, but not with BA. It’s the first time I’ve flown while sitting backwards, which was strange. When you take off or land, it’s like being on a rollercoaster ride. But you get over the fact that you are flying backwards. In fact, I didn’t even realise until we set off down the runway. It’s unique to BA, as far as I know.

The cabin crew were great. I’m lactose intolerant and they catered for me really well, rather than just assuming I’m a vegan. A lot of people don’t get it, but BA had a special option for me – it was the first time I’ve experienced that on an aircraft.