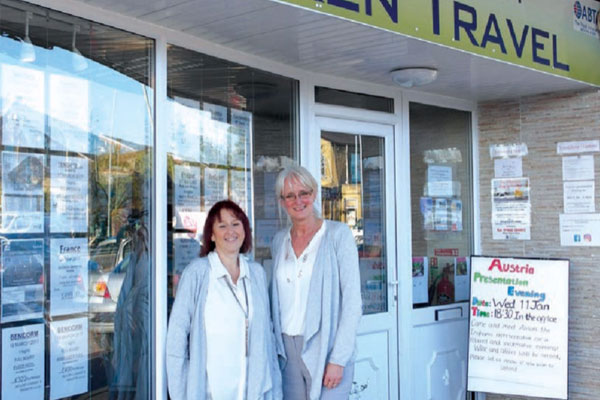 Lee Hayhurst visits Marken Travel in Billinge, the village where he grew up, and finds a friendly travel agency thriving on the high street.

If traditional high street agents had a pound for every time they’ve been told they need to specialise to survive, they wouldn’t need to sell any holidays.

The view that being a generalist in the modern age is a guarantee of extinction is something Marken Travel in Billinge has been proving wrong for 34 years.

The agency is based in a small row of shops in a quiet village between St Helens and Wigan, two rugby league towns with proud industrial histories and a fierce sporting rivalry.

Where you live in relation to nearby Billinge Lump, the highest point in Merseyside, traditionally determines whether you are a Pie Eater (a Wigan fan) or a Saints supporter.

However, all are welcome at Marken Travel, whose five members of staff are drawn from both sides of the Lump.

Owner Carla Hesketh, who started at Marken as an agent in 1990 before buying out the business in 2006, says they have discussed focusing on a niche but felt this was not right for the business or its customers.

“We were scared for a few years because people were saying you have to specialise in something, and that brochures would disappear from the shelves,” she says.

“But the question is, what do you choose to specialise in? We are all quite well travelled here, we do lots of fam trips, so we have a lot of knowledge about a lot of places.

“By being able to sell anything means we are not losing out.”

Marken Travel prides itself on its ability to offer choice, from a £7.50 David Ogden coach trip to Bury Market to luxury safaris or large overseas wedding groups.

As agent Mandi Grundy, who has worked at Marken since it opened in 1983, says, those small sales could lead to something much bigger: “A customer may be able to afford only Bury Market this year, but you never know who’ll win the pools next week.

“There are people who spend only £300, but that’s all they have and it’s as special to them as those who spend thousands.

“Everyone is important, and we want to deal with them all. When you’re sat in front of me you are my be-all and end-all.”

Grundy puts Marken Travel’s durability down to offering great customer service, but also to it being very much part of the local community.

“We give personal service but we also go the extra mile for our customers,” she says.

“Being part of the community for so long means people like us, and they trust us.

“Instead of standing in the cold and rain at the bus stop, they come in and have a chat and a cup of tea – and we have a loo.

“We’ll even give them a ride home if they have too much shopping.”

Hesketh adds: “People tell us they love coming in because their holiday starts here with the experience of booking it.”

The store has taken some tentative steps into marketing on the web – it recently paid Google £250 for a 360-degree Business View tour – but finds that word of mouth and local marketing still work.

The agent has a regular feature in Local Life magazine, in which it collaborates with suppliers and runs regular free themed evenings with operator partners for up to 40 customers. The latest was an Austria evening run with Inghams.

Marken Travel got its name from a combination of the first names of the two founders, Mark and Ken. It was originally one of five branches, and the first outside Cheshire.

Former managing director Gordon Clark lived locally and established the branch when the premises became available. It is now the only remaining Marken Travel after the others were sold off.

In 1998 Clark sold his share to his former PA, Sheila Barlow, who had been doing the firm’s accounts, and Marken travel consultant Trish Valentine. Hesketh first bought out Valentine, followed by Barlow in 2006, and is now the sole owner. The business is an Independent Options member of The Global Travel Group, and is therefore an Abta member.

Meet some of the team

Carley Ashton, travel consultant
Carley has been with the agency for 10 years. She says she can’t see herself doing any other job, and one day would love to buy the agency, just as Carla, the current owner, did. “We are like a little family,” she says. “We help each other if one of us is struggling with an enquiry about a destination they are not familiar with. I love it.” Carley, one of Marken’s younger staff members, oversees its social media presence.

Malcolm Shearim, travel advisor
Malcolm is an industry veteran with 44 years’ experience, having started work for Ellisons in St Helens aged 17. He joined Marken eight years ago after Ellisons closed its agency following the death of its director, Stan Magowan. Malcolm loves the diversity of the role, specialises in ski and admits to being embarrassed by naturist holiday enquiries. “You never know who’s going to walk through the door,” he says.

I was born in Billinge and grew up on its outskirts. For a time, one of my mum’s best friends, Trish, co‑owned Marken Travel, so visiting was something of a homecoming.

I was concerned I’d find a business struggling for survival, in a shopping parade fighting out-of-town retailers and the web. What I found could not have been more different. The shop epitomised the traditional travel agency: racks festooned with brochures and no techno gimmicks.

Its location ensures plenty of passing trade from loyal customers, and not just from older generations – two teenage girls asking about Magaluf were among the day’s customers.

The secret to Marken’s success is its team ethos. During my visit, agent Mandi confirmed a Croatian cruise for four couples with Cyplon Holidays. Shortly afterwards, she was called by Cyplon to pick a reward for the booking – she chose a case of prosecco so that she could share it with her colleagues.