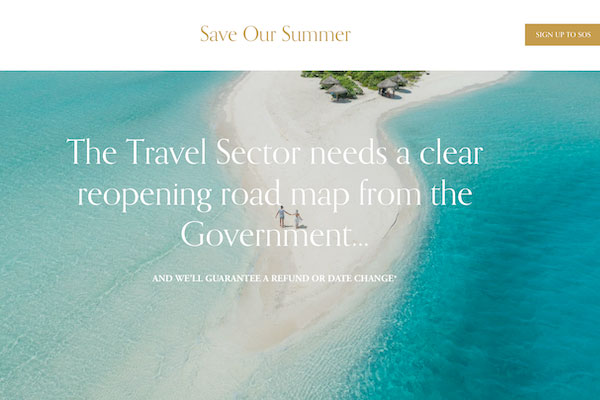 The Save Our Summer campaign says its calls for travel to be allowed to plan for a May 1 restart are “rational, reasonable and responsible”.

Writing to the prime minister ahead of his February 22 roadmap update, the group is urging Boris Johnson to include “clarity” for the industry in terms of when it can plan to restart.

The campaign group, launched on Monday, now has 735 travel company members, ranging from self-employed travel agents to larger industry players. Collectively, its members employ thousands of people and represent over £24 billion in sales.

Other industry lobbyists calling for a roadmap have not asked for a restart date, with some saying that publicly demanding one could risk jeopardising progress made through behind-the-scenes lobbying of government.

Co-founder Paul Charles, chief executive of The PC Agency, said: “The travel sector cannot be opened up like a hairdresser’s salon overnight. Airlines, for instance, need months of lead time to operate any kind of summer capacity.”

He added: “I was pleased to hear the prime minister say this week that he will base his roadmap on data.”

Comment:We must accept travel is not a priority for government

Charles noted the government had hit its initial vaccination target of protecting the 15 million most vulnerable by February 15, and pointed out that foreign secretary Dominic Raab said 99% of those at risk of dying from Covid would have had at least one jab by the end of April.

Charles said that, at the current rate, the government was on target to vaccinate 32 million people by April 6, and that infections are forecast to drop to below 1,000 cases by April – and that summer seasonality should be considered as a factor for cases dropping.

All this together, he said, means: “We therefore believe our proposal [to restart travel by May 1] is rational, reasonable and most importantly responsible.”

In his letter to Johnson, he said: “We appreciate that there may be further bumps in the road, and as an industry we are well prepared – offering exceptional booking flexibility for consumers, to protect their interests and enable them to plan future trips, as soon as clarity is given and confidence reignites.

“We have every faith that you will rise to the challenge, give our sector real clarity on Monday and lead the travel industry back to prosperity, protecting at least half a million jobs in the process.”