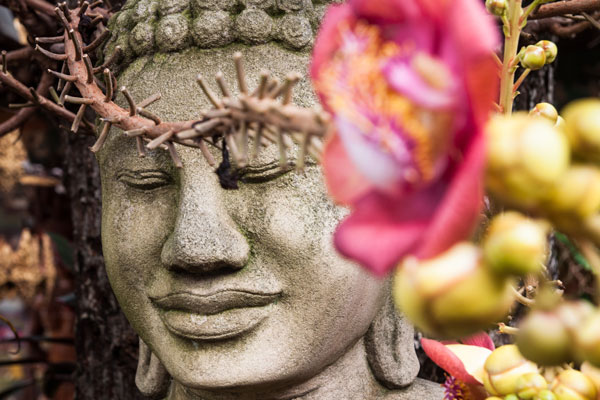 Find out what to do in Phnom Penh, Kampot, Kep and Koh Rong with Nick Redmayne’s guide to Cambodia.

The days when crowds would gather to watch the sunrise at Angkor Wat, searching for a moment of spiritual stillness in spite of the swarm of camera-clicking tourists around them, feel like a very distant memory.

Until last year, Cambodia’s biggest temple complex was drawing ever-increasing hordes of tourists keen to follow in Angelina Jolie’s Tomb Raider footsteps. Yet visitors rarely ventured any farther, often flying in and out of Siem Reap as an adjunct to tours of Thailand or Vietnam.

Now, despite talk about travel restarting more sustainably and avoiding the perils of overtourism, it remains to be seen whether visitors really can be persuaded to go beyond the most popular tourist sites. Those who do take the time to explore in more depth, however, will find Cambodia is a country reborn.

At the meeting of the Mekong, Bassac and Tonle Sap rivers, 19th‑century French planners created a city populated by art deco and art nouveau architecture. Phnom Penh survived the Khmer Rouge, its soul outliving that of several southeast Asian capitals. Steel and glass development still threatens to obscure its heritage but hasn’t yet succeeded.

About town, Tuol Tompoung or Russian Market, named after canny Soviet shoppers of the 1980s, provides a maze of narrow alleyways and stalls selling everything from T-shirts to tiger prawns.

For first-time visitors, a contemplative hour spent at Tuol Sleng Genocide Museum provides a necessary context. Considering the manifest depths of Khmer Rouge inhumanity, the almost universal hospitality of Cambodians is all the more remarkable.

Elsewhere, an evening stroll along Riverside, following the Tonle Sap from downtown, is a Phnom Penh ritual and a prelude to dinner. The city’s innovative restaurant scene, led by young Cambodian chefs, serves up world-class Khmer, French, Thai and Vietnamese dishes across an unsung capital of flavour. Luu Meng’s Kroeung Garden Restaurant is a particular favourite.

Late-night bars are part of the package too, from the upmarket Sora Skybar where the haute bourgeoisie are cantilevered out from the 33rd floor of the five-star Rosewood hotel, to febrile ground-level music venues like Oscars on the Corner, inhabiting the margins of chaos and immorality – a wild night is guaranteed. 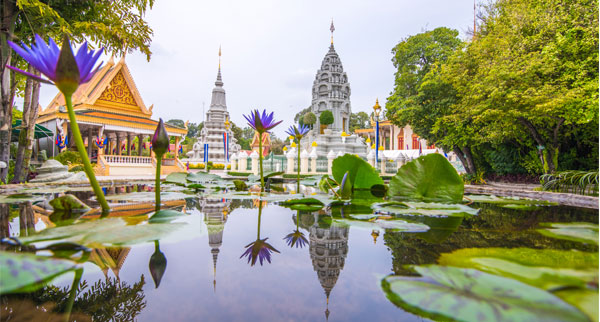 About two-and-a-half-hours’ drive from Phnom Penh, this buzzy coastal city lies on the Praek Tuek Chhu river, close to the Gulf of Thailand and the border with Vietnam. Among a visible French architectural heritage, some buildings have been restored and repurposed, including the excellent Hotel Old Cinema, while others remain in genteel decay.

The local economy is fairly fragrant, based on fishing, the malodorous durian, and pepper, the best of which is exported and sold on the Champs-Elysées for €300 per kilo.

“Among a visible French architectural heritage, some buildings have been restored and repurposed, including the excellent Hotel Old Cinema, while others remain in genteel decay.”

The town is also the gateway for Preak Monivong Bokor National Park. Still notable for hiking tours, the park’s atmospheric abandoned 1920s French hill station has been redeveloped into near-industrial casino tourism for the Chinese market. Just outside town, an international ferry terminal is under construction, promising to bring in vessels from Vietnam and Thailand. 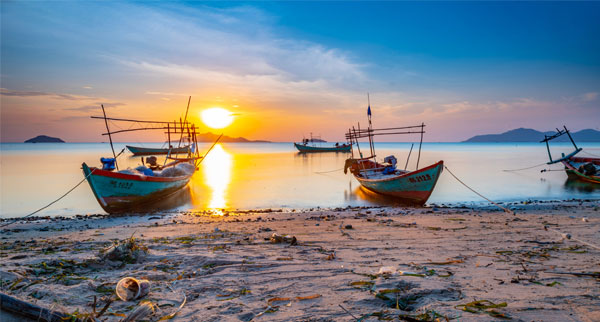 On the coast, around 15 miles from Kampot, Kep-sur-Mer, as the French called it, was once a resort for privileged colonialists and rich Cambodians. Modernist villas punctuate the shore, exemplars of the 1960s wave of New Khmer Architecture. Some of these properties have been converted into upmarket hotel accommodation, such as the five-star Knai Ban Chatt, while others are mouldering shells.

“Some properties have been converted into upmarket hotel accommodation, such as the five-star Knai Ban Chatt, while others are mouldering shells.”

As well as beaches, a diverting interlude can be found at the dark and crowded Kep Crab Market, which provides an  unrelenting assault on the senses. Small boats land seafood that’s sold fresh or barbecued in situ, attracting a feeding frenzy of hungry customers. War on fish, but delicious. 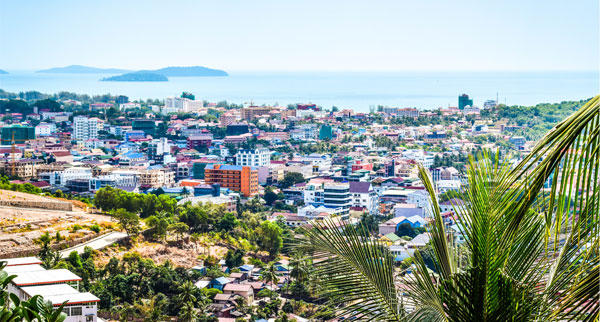 At the tip of the peninsula, 60 miles west of Kampot and an hour’s flight from Phnom Penh, the golden sands of this former fishing village once attracted a flow of tousled backpackers. Fuelled by tax breaks and Chinese investment, brutal high-rise hotels, apartments and casinos now line the shore.

Fast ferries from Sihanoukville serve around 60 of the sandy, palm-fringed islands in Cambodia’s Gulf of Thailand waters.

Koh Rong, 45 minutes from the mainland, was popularised by a French reality TV show and is the largest and most developed, offering beach bungalows and international resorts such as Golden Sands. Nearby Koh Rong Sanloem is quieter and appeals to budget travellers. Elsewhere, Six Senses exclusively occupies the islet of Koh Krabey, providing fine dining, dreamy spa treatments and unlimited ice cream to those with deep pockets. 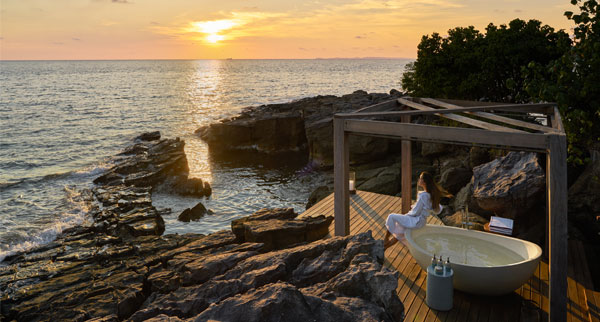 What to expect on a trip to Singapore when travel restarts
Five of the best sustainable projects around the world
The best way to spend 48 hours in Kuala Lumpur, Malaysia