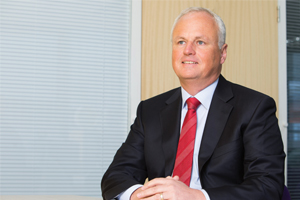 The airline’s chief executive, Andrew Swaffield, will chart the way for carriers at the forthcoming Travel Convention – and it won’t be charter flying. He spoke to Ian Taylor.

Chief executive Andrew Swaffield drove the sale and restructuring through in just 12 weeks, after taking the role only in July 2014.

The restructure led to annual costs being cut by £200 million, as trade unions agreed to 700 redundancies and pay cuts of up to 30%. Swaffield cut the Monarch Airlines fleet by a quarter as he dropped charter and long-haul flying and moved to scheduled‑only, and cut capacity for this summer by up to 20%.

The upshot was a £40 million improvement in winter losses, allowing Swaffield to forecast a double-digit operating profit this financial year – something Monarch has not enjoyed for a long time.

With the group’s future secure and its 50th birthday approaching in 2017, Swaffield can step back to consider the future of leisure flying more generally – a subject he will address at Abta’s Travel Convention in Greece this month.

The tale of Monarch’s restructuring tallies perfectly with Swaffield’s perception of the future facing the sector.

“The story of Monarch’s restructure was our move from charter to scheduled flying and our cost-led recovery,” he says.

Swaffield intends “to remind everyone how far we’ve come”, while spelling out what he believes to be a general lesson that “charter flying is on its way out”.

He adds: “The trend towards all airlines becoming scheduled low-cost carriers is clear. The consumer trend is towards less fixed days of departure, and that lends itself to less charter flying. The low-cost carrier sector is just going to carry on growing.”

Tour operators may still seek charter flying, but Swaffield says they are “perfectly compatible” with scheduled airlines. “It does not make sense for tour operators to be taking all the risk when they can take seats on low-cost carriers,” he says.

The only exception Swaffield sees to the demise of charter flying in Europe is at Tui, which has “sufficient size and scale to fill its own aircraft”.

So does he foresee low-cost carriers making a success of long-haul flying? “A low-cost long-haul model is starting to emerge with Norwegian Air Shuttle and now WestJet [flying to Canada]. But long-haul is way behind short-haul [on this]. Mediterranean charter flying is what is most threatened.”

Swaffield envisages “huge” consolidation in Europe over the next 10 years and the removal of a swathe of carriers. He says: “There probably ought to be a third fewer airlines in Europe. We’ll see a polarisation between winners and losers, and there will be a huge amount of mergers and acquisitions over the next decade.”

However, he does not foresee a price war driving airlines out of business this winter, despite a chilling recent forecast by Ryanair boss Michael O’Leary.

Ryanair raised its full-year profit expectations to more than €1 billion last month. At the same time, O’Leary warned investors of “attritional and sustained fare wars across Europe this winter”.

Swaffield says: “I’m trying to remember a year when Ryanair has not warned about that. Of course, it advertises flights at £4.99. But there is no reason to believe this winter will be seismically different [from last]. The summer has been good and winter [2015-16] has got off to a remarkable start.

“We had a very good summer, despite headwinds like Tunisia and Greece. We’re up on sales, with better pricing. Turkey has not been great, but it has been more than made up for by Spain, Portugal and the rest of the Mediterranean.

“Greece was down by 50% for about seven weeks [in early summer], but a lot of a demand came in once the crisis was resolved.”

He says airline pricing has been “quite sensible”, adding: “We didn’t see silly low pricing at any time this summer. I’ve heard nothing negative and volumes are looking much healthier [than last year] going into winter and summer 2016.

“The economy feels better. The exchange rate of sterling against the euro is better [than a year ago], and perhaps the industry is maturing a little in its attitude to capacity and pricing.” His response to the incredulity I express at this last point is to add: “Well, we played a part in taking out capacity and we’re very happy.”

One thing Swaffield does not intend to talk about at the forthcoming convention is airline delay compensation and the latest European Court ruling on air passengers’ rights (Travel Weekly, September 24). He does not appear to share the anger of many airline executives at the widening scope of the European Commission’s Regulation 261.

Swaffield says: “We can’t change the law. We can grizzle and moan about legislation, but we can’t affect it. The best thing we can do is make our operations more efficient. The trend is clear. If you go to court you’ll lose, so we should stop moaning and get on with it.

“Delaying customers isn’t good for business. We’re quite lucky. We were performing worse [before the restructure] because we had a complicated business model. We simplified the business and dramatically reduced our exposure to delays.

“Complexity is the biggest problem. The more complexity you have, the more delays. Regulation 261 is disproportionate and there is a cost to it. But I’m not wasting my energy fighting something I can’t change.”

The Travel Convention will be Swaffield’s first, after he joined the Abta board at the end of 2014.

He says: “I’ve attended half-a-dozen board meetings. I’ve found it rewarding and I’ve been impressed with Abta and with Mark Tanzer. It’s good to be part of the industry and the association. But the convention will be new for me.”