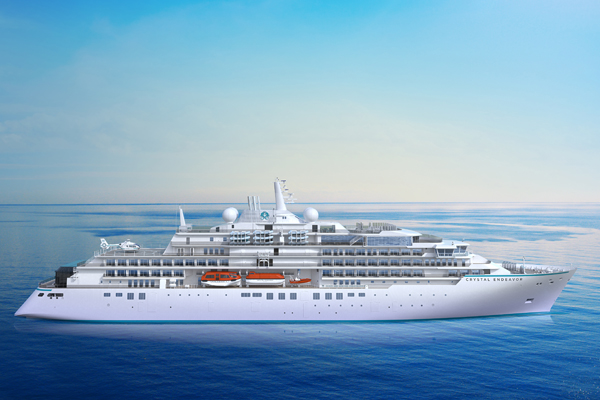 New expedition ship Crystal Endeavor is on track to enter service this summer after its launch was delayed in August due to the Covid crisis.

The 200-passenger vessel was put back as the pandemic forced a shutdown of German shipyard MV Werften.

The yard has now reopened and work has resumed on the ship.

Crystal has cancelled Crystal Endeavor cruises until May 1 and is reviewing its summer itineraries.

The luxury line’s owner Genting Hong Kong recently completed a €193 million loan with the German government for the completion of the ship and to support the operations of the shipyard until March.

GHK announced the termination of a sale and leaseback deal of Crystal Endeavor in December with the aim to simplify the structure for typical export credit agency covering post-delivery financing for the ship.

“This does not have any impact on the ship’s planned operations,” the company said.

Upcoming destinations include the Norwegian fjords and Scottish islands, France, Spain and Portugal, the Atlantic Isles and west Africa, Brazil and Argentina, and Antarctica.

Crystal interim president and chief executive Jack Anderson said: “While we are certainly disappointed that Crystal Endeavor’s delivery has been delayed, we are encouraged by the progress and dedication of the professionals at MV Werften and are looking forward to introducing this remarkable ship.”