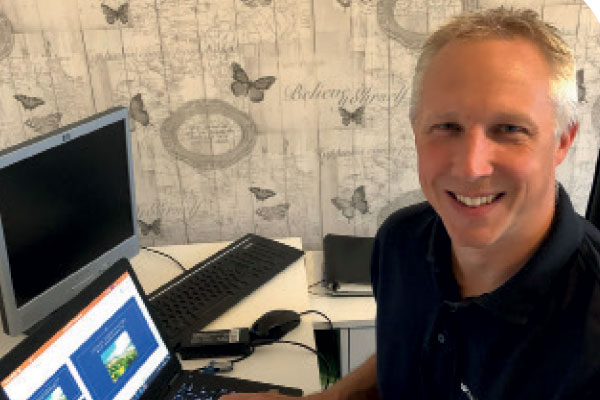 The UK lockdown in March prevented operators’ regional sales manager from getting out and about to meet agents. Many turned to video calling to continue to engage with the trade and to provide product training – with great success.

Now, with some semblance of normality returning, Travel Weekly asks three suppliers if their sales teams have resumed face-to-face meetings

“We are working hard, but we are also working smart,” says Jon Knight, national sales manager at AmaWaterways.

Knight (pictured above) says his team has been “busier than ever” during the Covid-19 pandemic despite the river line’s on-the-road team not being out and about.

None of the three have been made redundant or furloughed. Instead, Knight and his team have partnered with agencies to put on a programme of trade webinars and pre‑recorded agent training sessions.

They’ve also produced 50 virtual cruise events for travel agents to invite customers to ‘attend’, and the most well-watched of these was viewed by 129 people.

In addition to his responsibilities as national sales manager, Knight also currently covers agencies in the southeast. Business development manager Joanne Smithies looks after agents in the north of England, Scotland and Northern Ireland, while fellow BDM Rachel Simon is responsible for the southwest of England, the Midlands and Wales.

On average, Knight says each of the team is making five or six calls to agents a day.

“We’re busier than ever,” he says. “We encourage our team to think of themselves as still being on the road within a geographical area. Instead of being out on the road, they are doing virtual meetings or phone calls.

“We’re quite a small outfit. It’s much easier for the field sales team to get in touch with agents.”

Knight says that, prior to Covid, one training session would almost fill a BDM’s day.

“It is not sell, sell, sell,” he adds. “We are very much into hearing from the agent, seeing how we can support them and listening to their needs.

“They have a lot on their plate so the last thing you want to do is bang out all these sales messages if they are not in a position to talk sales.”

In March, the line contacted agents to gauge whether they wanted face-to-face meetings. “It was very 50:50 then,” Knight says.

Face-to-face meetings are still on hold, and a decision on when to resume them is under review. Knight says he feels meetings have not felt “right” up to now, adding: “We will have a discussion and see if it’s appropriate. We do much prefer speaking to people one on one. But we are making the best of the world that we are living in.”

A Titan Travel agency sales manager has been overwhelmed by the welcome she has been given since starting to visit agents face-to-face again this month. 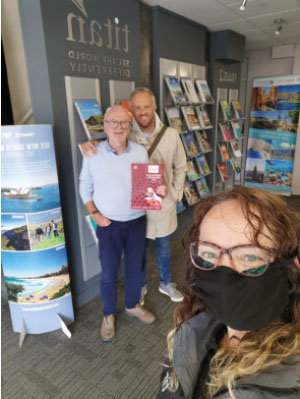 Michelle Halsey has visited about 15 shops in the past fortnight. Although she admits she was tentative at first, and some meetings have been “fleeting”, the vast majority have been positive.

Halsey, who oversees agents in the southwest of England and Wales, is currently the only one of Titan’s three agency sales managers back out on the road. However, that could change in the coming weeks if some regional lockdowns are lifted.

“I am very lucky to be living in a part of the country that has been relatively unaffected and had such a low number of cases,” Halsey says.

“I was speaking to agents all the time when we were locked down. And I had so many people saying I would be welcome [in shops], so I thought ‘why not?’ I asked if Titan would be happy for me to get out on the road and they said they’d be delighted.

“They have been supportive. I went out very tentatively initially, because I wanted to see what the reaction was, and it was overwhelmingly positive.”

Halsey says agents have commented that they have seen few business development managers back out on the road.

“There are a lot of agents saying that there are not many BDMs and it’s hard to get hold of them,” she adds. “Now we are out there again, agents are happy to see us. It’s about being visible.”

Head of trade sales Edwina Coppock says virtual meetings have been “the next best thing to shop visits”. She adds: “Going forward, some agents may even prefer to arrange virtual meetings even when social distancing becomes a thing of the past.”

Halsey has also met agents virtually, using Zoom and Microsoft Teams, as have her fellow agency sales managers at Titan. “I would never have video- called an agent before, but that’s now a normal thing too,” she says.

Agent training on Zoom has been “the best thing to come out of lockdown”, according to Palladium Hotel Group’s Joanne Peters. 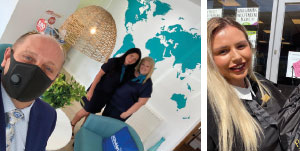 The senior business development manager has been offering sessions on Zoom to ensure agents have been kept up to speed with Palladium’s progress during the pandemic.

The return of Tasha Smith and Kevin Richardson from furlough on August 1 has enabled the business development team to meet agents face-to-face again.

In the past two weeks, the team has visited agents in Evesham in Worcestershire, Newcastle, Crewe, Cambridge and Norfolk.

However, Peters and the team have continued to offer Zoom training alongside in-store visits. Smith and Richardson have been tasked with putting on 12 Zoom training sessions every week.

Peters says: “The Zoom training has been the best thing to come out of lockdown. The sessions last for 35 to 45 minutes.

“It is important agents see us out and about, but we need to be responsible about how we are doing that. That is why we have gone down the road of Zoom training. Our store visits are to give a brief update and to ensure we stay at the front of agents’ minds.”

Asked if bookings had been made off the back of Zoom training, Peters says: “Loads. Every time we do Zoom training, we ask agents to message us if they make bookings and we have quite a lot. We put that message on social media to say ‘thank you’ to that agent. We are really grateful for agents’ support and this has been shown by the number of bookings that have come in.”